The world leading industries nowadays are the services industries. Markets do not only demand for good products, but good products with good services. Even, the word "good" is not enough, markets demand the best highly professional services which only can be handled by human. This is one of the reason why human resource is best known as human capital, as human the most valuable asset of industries.

Therefore as employees, we have to work our best as human capital, not as a machine. I am saying as machine is the one who go to work, do what the boss ask you to do then go home, when its time to go home. Even sometimes, employees are worse than the machine, they do not work as their function. 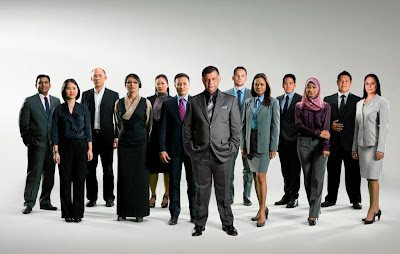 After following the show until this third last episode, I saw some characters that we often meet in work environment, and of course all of those characters are interesting. Each of the characters is expected to show its leadership, while not all character has leadership in it.

As I am Indonesian, I would like to comment about the candidates from Indonesia, they are Hendi and Dian. Both of them are not managed to get to the final four, in fact Hendi was fired in the first episode/ task which when he was in charge as the Project Manager of the lost group. Hendi was able to be assumed as resigned than got fired, because when  Tony Fernandez asked him to choose two candidates who he want to accompany him in the board room to be fired, he chose the strongest two, which means he was indicating himself to be fired. In the end of the episode when he got fired he said "I can't believe I lost (the challenge)."

While Dian, according to Tony Fernandez, she does not want to show her capability, there were many opportunities where she can perform her abilities and leadership and somehow she chose not to shine. One of Tony Fernandez' right hand, Pam was thinking 'what is Dian doing here?.' From what I see, Dian does not want to be or to look like the others, who are hungry, emotional, and kind of bootlickers. However, when Tony kept asking why she did not want to stand up, perform, or take charge, she kept saying "I know, I'm not yet able to show my ability bla bla bla," she should have said something better than that.

Now, for the final four. There were Alexis, Sam, Johnathan and Andrea. Alexis is known as the never disappointing in every task, I think Alexis is smart and he will be successful in anywhere, any kind of business line. However, he is too smart, too experienced, and too successful to be an apperntice in AirAsia or in any of Tony Fernandez' business. That is why, he was not chosen into the final two.

Then Sam, he is analytic, fun with positive attitudes which surely will bring positive result. From the show it is said that Sam is successful in his job, and he already has a good career, even Tony Fernandez' team were questioning if Sam is really going to sacrifice what he has now for AirAsia or other Tony Fernandez' business. One thing that Toni is disturbed from Sam is that, Sam never show emotional reaction when he enter the board room, no chill, no nervous, which might able to be assumed that he was not really want it, like it was nothing to loose.

The final two are Johnathan and Andrea. I know from the show that Johnathan has a strong emotional passion, he showed that he is willing to do everything at his  best to fulfill what it is needed or required by the boss. However, I do not think that is enough, I do not think Johnathan is good enough to get the position compared to his final rival Andrea. Johnathan so far is not quite sincere, he could play deceive, as he was always attacking other candidates and always defending himself and never say that he could be the responsible person for a mistake in a task.

Andrea is smart, the last words she said to convinced Tony actually also convinced me. She was saying that everybody is attacking her as she was the youngest and the least experienced among the others, and yet she has proven that she successfully managed to still there, which is true. Also Andrea is known as her emotional expression which she cannot hide or manipulate, and her explanation was she was trying to be herself, and to be a person that able to be trusted as she does not try to deceive anyone about her feelings. Everything that she said was reasonable and acceptable.

For me, the final two, if taken from the best out of final four would be Andrea and Alexis. However, if so, Alexis might will show better result than Andrea and as I explained before, Alexis is too good and successful to be an apprentice in AirAsia, and Tony Fernandes needs someone who can be loyal working in AirAsia or in any of his business to show the world that working with him is a promising career opportunity. Therefore final two, Andrea and Johnathan are the most wise decision. Both are passionate and young, both have the qualifications as an apprentice, however Andrea will win in this competition.
Posted by Nining Sutrisnaningsih at 8:37 AM No comments:

Have you watched 2012 Academy Music Award ? If you did, did you agree with the winner of the awards? If you did not agree then it means we are not belong to today's generation.

LIFE OF PI THE MOVIE

I can say that this movie represent when a great writer meets a great director.